It may be a rollicking tall tale, but The Treasure of Mad Doc Magee has deep roots in New Zealand history.

In May of 1861, an Australian miner named Gabriel Read was prospecting in a creek bed near Lawrence in the South Island. Here’s what he said about his discovery:

“At a place where a kind of road crossed on a shallow bar, I shovelled away about two and a half feet of gravel, arrived at a beautiful soft slate and saw the gold shining like the stars in Orion on a dark frosty night.” History of the Early Gold Discoveries in Otago by Vincent Pyke.

Soon enough, the area was flooded with young men searching for quick fortunes. At the height of the Otago Gold Rush, 18,000 miners were swarming over the mountains & rivers of Central Otago.

Some of them were veterans of the California Rush (the original “forty-niners”). But there were also Māori miners, European settlers, and Australians looking to make good.

MAGEE FUN FACT: For stories on Māori participation in the Rush, including the tale of Māori Jack, see Finding “Te Wherro” in Ōtākou: Māori and the Early Days of the Otago Gold Rush by Lloyd Carpenter.

Gold Rush towns had a habit of attracting unusual personalities. The oddball characters depicted in films such as The Gold Rush (1925) and Paint Your Wagon (1969) aren’t too far from the truth. Jenny Burns never met many of the miners who came to Eden, but the mysterious narrator of her tale remembers them:

There was Soapy Jones, who bragged he could smell gold through the ground. Gamblers would often observe him snuffling along Main Street with his nose in a newspaper cone. “The better to focus the scent,” he’d say.

There was Kip-Two Fister, who laced his beer with flakes from the Arrow. Drinking your fortune may be a good spectacle sport, but it didn’t do much for Kip’s constitution. It’s no wonder his friends took an interest in his long drop.

There was Lucky Cork and Roaring Sue and Pistol Harry. There was Lazy Bill and Swifty Dan and Tiny Samson. But I’m sure the character you’ll be most curious about was Doc Magee. The Treasure of Mad Doc Magee

The smart ones arrived early, mined quickly, and moved on. The unlucky ones died from disease and disaster. The rest just tried to strike it rich.

MAGEE FUN FACT: Jenny’s fiery temper is one reason why she bears the last name of “Burns.” Another reason is A River Runs Through It. The maiden name of Norman Maclean’s feisty wife is Jessie Burns. 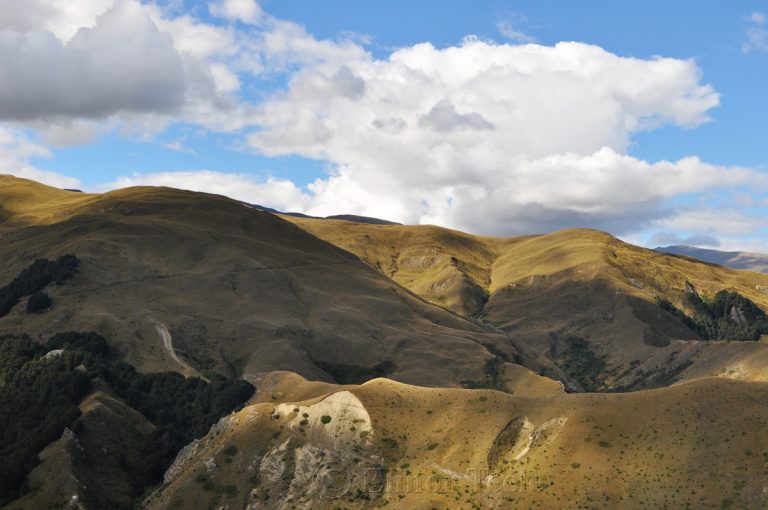 The Reality of Gold Mining

Jenny’s father, Hapless Burns, falls into the third category—the dreamers and the fools. Like a lot of treasure hunters, he had unrealistic expectations about gold mining:

“Do you know what I did the first minute I stepped off the boat? I bought me a tin of gold grease. The shop owner said I should spread it all over me and roll down the hill picking up flakes. Easy as that, he said.” The Treasure of Mad Doc Magee

But life in the gold fields wasn’t easy. If you arrived after the first wave of men, you might spend months in a fruitless quest.

“Easy as that,” Hapless repeated, ruefully. “He didn’t tell me what it was like to stand in a freezing river, with my back crippled and my fingers flash-frozen to the pan. Didn’t mention the cold and the muck and the wind howling through your eye sockets. Didn’t say what it was like to live in the society of a thousand greedy men, worrying your throat would be cut for the sake of your tea. Easy my—” Hapless paused. “Aunt Sally.” The Treasure of Mad Doc Magee 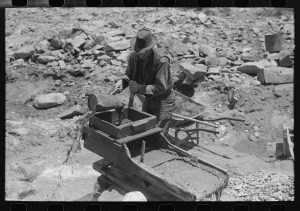 A lot of Hapless’s work would have involved sifting for gold with a perforated pan. Experienced miners developed more sophisticated methods:

All the way down the river, Jenny spotted dozens of worn-out wooden contraptions resembling hollow shoes. These were the rocker boxes, where a sieve at the top of the heel and a series of ridges running toward the toe allowed a miner to separate the gold flakes from dirt.

From these cradles grew the Long Toms—troughs of ten, twenty, thirty feet or more. And from the Long Toms grew the greed. Gallons of pure stream were forced into ditches, punched into rocks, and ferried toward sluice boxes. By the time the water reached the river, it was brown with silt and crud. The Treasure of Mad Doc Magee 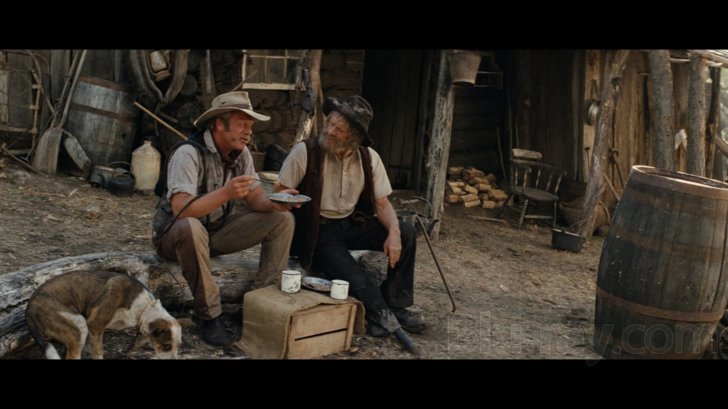 For shelter, men mostly huddled in tents or hastily constructed shacks. It was a damp, cold, and uncomfortable life. Doc Magee’s hut is quite sophisticated for the time period:

The bulk of it was built with flat river schist, with walls stacked a mite higher than a man’s top hat. One side was a chimney pipe, supported by a fat wad of rocks. The other side was simply a higgle and piggle of stone. Two slabs of corrugated iron met in a peak above the weathered wood door. You’d find more beauty in a wart. The Treasure of Mad Doc Magee

In The Man from Snowy River (1982), you’ll see that Spur has made his Australian hut quite fancy. He’s been gold mining for years, so there’s been time for interior decoration.

MAGEE FUN FACT: Doc Magee’s dwelling was inspired by Sam Summers Hut on the Mount Crichton Loop Track. (However, Sam’s hut was built in the 1930s.) Pandora’s hatred of rats is a tip of the hat to Indiana Jones and the Last Crusade.

Entertainment in the Goldfields

In their down-time, men were anxious to find amusement. Many liked to drink & gamble in saloons. If you were smart, like King Louis, you supplied the miners with refreshments & accommodation. You could make plenty of money off men who were flush with riches and you didn’t have to stand in a glacial river to do it.

According to Louis, panning for gold was the profession of youngsters and fools. A man of fifty owed it to himself to adopt a nobler occupation. Like poker. The Treasure of Mad Doc Magee

MAGEE FUN FACT: Miners gave English names to many landscape features in Otago. The character of Gentle Annie is named after a real-life creek that runs into the Kawarau River. 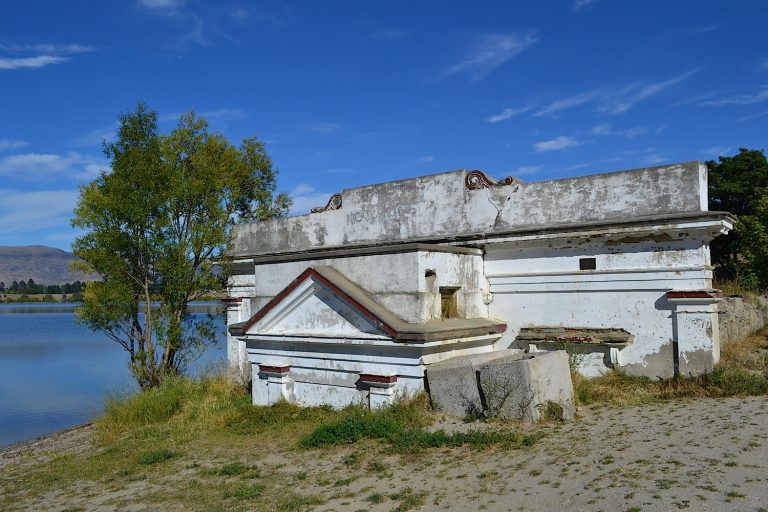 Theater in the Goldfields

Along with gamblers, theater companies often followed the strikes. During the Otago Gold Rush, one of the major impresarios was Clarance Holt. Born in England, this actor/acrobat/manager roamed the British colonies during the 1850s and 1860s, performing with his touring company in the goldfields. In the early 1860s, he established the Theatre Royal (on Princes Street) in Dunedin and wowed the crowd with Shakespeare.

Poor Mr. Grimsby would have been one of the minor actors in Holt’s entourage. In Chapter 3, you’ll find that the schoolmaster has not forgotten his early training:

It was whispered around Eden that the schoolmaster had learned his way of speaking from an early career on the stage. Someone had seen a poster billing a man named Grimsby as the second sailor in The Barbary Pirate, a lost play by William Shakespeare. It was a sound-enough theory. Acting is not a profession that lends itself to survival. The Treasure of Mad Doc Magee

MAGEE FUN FACT: Though Mr. Grimsby starts the story as a two-dimensional character from Victorian melodrama, kid readers may notice he acquires three dimensions along the way. 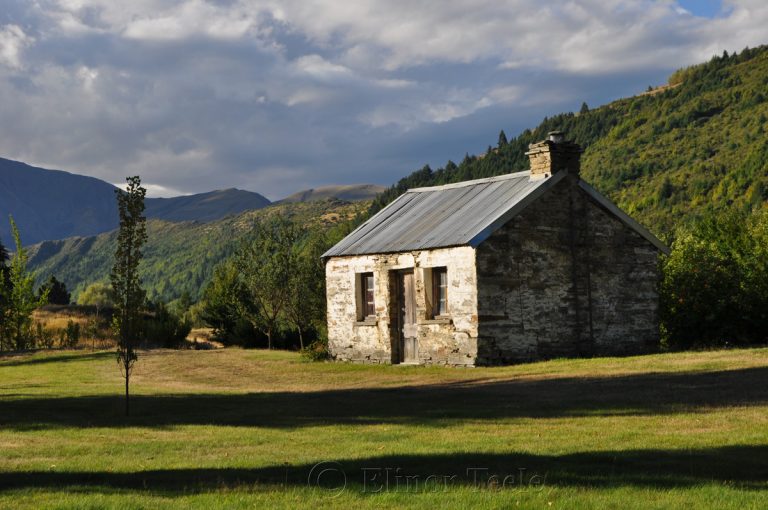 The End (and Beginning) of Adventures

The Otago Rush only lasted a few years. With so many diggers overrunning the area, the flow of gold quickly ran out. As the narrator puts it: “They came, they fossicked, and, before you could blink, they were gone.”

A number of folks headed to the West Coast, where another Rush was just getting started around Hokitika. (This is the wild setting of Eleanor Catton’s novel, The Luminaries.) Other men settled down in the area and became farmers, shopkeepers, and respectable citizens.

When Jenny begins her adventure, the excitement of the Rush is half-forgotten—except, that is, for Doc Magee’s missing gold nugget…