Love and pride do battle in this stark modern tragedy. 3M & 1F.

Esther, the daughter of a dictator, has been sentenced to death for an act of courage in the civil war. On the night before her execution, she meets her guard – a foreign mercenary with a checkered past. In the dramatic events that follow, we learn what it costs to challenge the boundaries of family, truth, and fate. 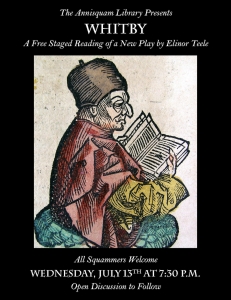 An absorbing historical drama with all the elements of a chess game. Based on a true event. 5M & 2F.

The Venerable Bede, famed chronicler of English history, is having a rough morning. It’s a cold winter’s day in A.D. 728 and he’s due to complete a chapter on the Synod of Whitby – a pivotal event in Anglo-Saxon history when scheming kings, queens and bishops decided the fate of Northern Christianity.

What’s written in the history books, however, is only the beginning of the story…