Arrowtown is the inspiration for Jenny’s hometown of Eden in The Treasure of Mad Doc Magee. The settlement lies nestled in the Southern Alps, with mountains all around:

“To picture the world where our heroine roamed, you’ll have to imagine a snug little valley, with pastures like hides and rivers like arteries. This was a living, lively place, where every peak held a secret.” The Treasure of Mad Doc Magee

Hastily built in 1862, Arrowtown managed to survive the decline of the Otago Gold Rush. Today it’s a popular tourist destination with one major thoroughfare:

“There was still silver on the ridge of the Sleeping Girl as Jenny came flying down Main Street, but Eden was winding down for the day. Doors were banging, brooms were whisking, and flies were settling down to feast on the blood of the butcher’s knife.” The Treasure of Mad Doc Magee

You can look at a street map and a topographic map of Arrowtown to see where Jenny lives. In the book:

MAGEE FUN FACT: If you visit Arrowtown today, you’ll encounter a number of “miners’ cottages.” The original gold miners lived in tents & shacks. The existing cottages were built after the Rush and used as stores and homes for shopkeepers and other tradesmen. Doc Magee’s office is based on these dwellings.

When the Rush economy faltered, the Otago Provincial Government invited Chinese men to try their luck at mining. In the late 1860s and 1870s, they came from the Guangdong Province to the “New Gold Mountain” (California was the original Gam Saan) and reworked many abandoned sites. Their experiences are fictionalized in Illustrious Energy, the 1988 N.Z. film.

In Arrowtown, immigrants were required to live at the edge of town—the restored Chinese Settlement is a living record of their history. You can still step inside a few of their buildings and view their belongings at the Lakes District Museum.

Like others who stayed in New Zealand, Chinese men turned their hands to different occupations after they gave up on gold mining. Market gardening was a common business opportunity. Kam & Lok, two of Jenny’s great friends, are in this business:

In the parlance of Jenny’s day, Kam’s market garden was called Little Eden. Before the Lum brothers took it over, it was a small scrap of nothing down by the north end of town. Now it was ruled as a kingdom of earth.

There were long mounds and furrows for the crops in demand—taters and cauliflowers, broccoli and lettuce. There were herbs in their beds and berries in their bushes. And at the edge of the garden, in a pocket of sunshine, there were apples and plums, peaches and quince. In the spring, you’d catch lovers under the blossoms. The Treasure of Mad Doc Magee

MAGEE FUN FACT: The name of Kam & Lok’s father is an homage to Ah Lum, a real gold miner who settled in Arrowtown and became an honored figure around town. 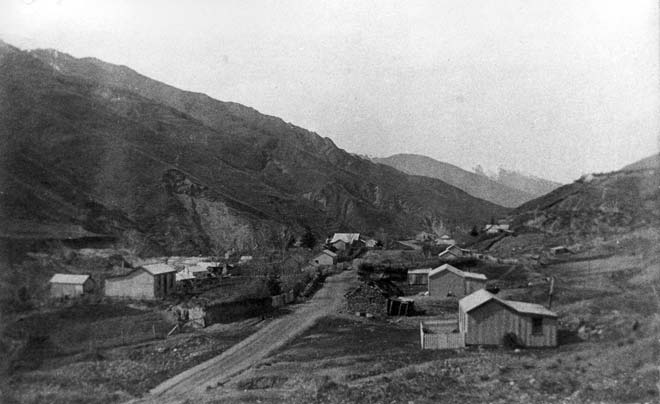 If you head up the Arrow Gorge (take a guide—the river can flood!), you’ll eventually reach Macetown, a Gold Rush settlement named after the Mace brothers. In the book, this is the mysterious ghost town of Troy:

The blue of the sky was rimmed by the purple of sunlit rock. Caps of white crowned the mountains. In the hollow of the valley, the town was gray with wear, and green with turf, and yellow with aging oaks. Orange and red streaks, the scars of last night’s polar blast, were fading from the east. The Treasure of Mad Doc Magee

At its peak, the town had 300 people. There was a church, a schoolhouse, a bakehouse, and two hotels. There was even a small Chinatown. Quartz mining gave Macetown a brief lease on life after the Rush, but the town was fading by 1900. Now just the bakehouse and the schoolmaster’s house remain.

MAGEE FUN FACT: Macetown had a group of hard-drinking, hard-gambling miners called the Twelve Apostles. In Macetown: The Story of a Fascinating Gold-Mining Town, Eileen Beaton notes how the Apostles gave each other titles like “The King,” “The Doctor,” or “The Saint.” Readers may recognize similarities with Doctor Mike Magee and King Louis, owner of the Last Chance Saloon.