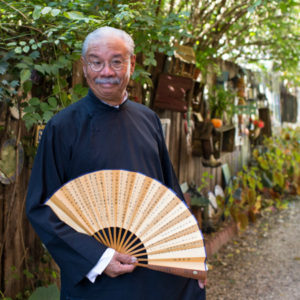 When it comes to Kam and Lok’s life in Eden, special thanks must be paid to William David “Charlie” Chin. His insights into The Treasure of Mad Doc Magee were invaluable in the draft stage. It was a pleasure to spend time in his virtual company!

Charlie is a font of knowledge about the Asian American experience—he was one of the first to collect oral histories & family stories from the old timers of Chinatown. He has served as the Community Education Director at the Museum of Chinese in America, the Artist-in-Residence at the Chinese Historical Society of America, and a Smithsonian Community Folklore Scholar.

Charlie is the author of two children’s fables and a distinguished dramatist. Plays such as A.B.C., American Born Chinese (1983), 10,000 Stories of Chinatown (1991), The Last Spirit Boxer (1992), and Hawaiian Sweethearts (2001) have been produced in Boston, New York City, and San Francisco.

At the moment, Charlie is preparing a book about San Francisco’s Chinatown, its history, culture, and cuisine. He is also working on stories for young readers about:

Much of this work has grown out of his presentations to kids in San Francisco schools.

Mu Lan, often called “the Chinese Joan of Arc,” is a young woman whose aged father is summoned by the emperor to fight an invading army. She dons her father’s armor, distinguishes herself in battle, only revealing her true identity when the war is over. (School Library Journal)

Townspeople come up with a plan to get revenge after a greedy farmer in China cheats Mo Chin out of a year’s worth of wages.

They walked into the forest. Soon they reached a tree near the flowing stream. Mo Chin asked his bird, “Is this a good place to find gold?”