“Course, it’s not the drunks but the cows you have to watch out for.”

It’s Tuesday morning in the home of Trish and Collin, in the township of Fox Glacier. Out there beyond an indistinct blob of gray lies the back end of Aoraki/Mount Cook, New Zealand’s highest mountain. 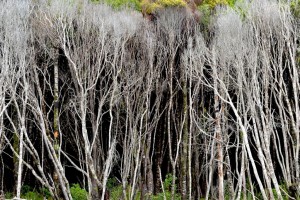 Somewhere in the yard, Angelina, a black and white feathered chicken, is tending her brood of multi-hued chicks. To my immediate left is a stuffed chamois, realistically perched on an artificial crag, who is eyeing up my toast. Collin has just been explaining how cows like to lie down on the warmth of the tarmac at night. And since there’s only one two-lane highway to get you here and back, it’s best to be alert.

Welcome to the Coast.

Kiwis (the people, not the birds) will tell you three things about the South Island’s West Coast:

Now to be fair, it wasn’t raining when my brother and I set out from Central Otago to explore Te Tai O Poutini. It was drizzling.

With only three days to spare, we were limiting ourselves to Westland, where the Maori came for pounamu, the Europeans came for gold and the tourists come to view the ever-receding glaciers. This is a glory designated as part of a UNESCO World Heritage site, an ancient coastline flanked by misty mountains (still unclaimed by Peter Jackson) and the Tasman Sea.

Setting out from Lake Wanaka, we took the old Maori trading route backwards, tripping lightly into the podocarp and beech forest walks at the tip of Mt. Aspiring National Park. Since, by the by, it rains a lot, the waterfalls and the glacial pools are particularly spectacular. When we weren’t marveling at the azure waters, we were counting one-way bridges (we lost count) and identifying creeks, including the Mad Hatter-like “Half Bridge No. 2” and “Solitude No. 2”.

A little aside: alert travelers can track the entire mental history of gold miners through the creek names. Over the course of our journey, we noted “Boggy,” “Dismal,” “Bishops Folly,” “Grave,” “Dancing”, my personal favorite “The Windbag” and, when inspiration finally failed, “Random.” 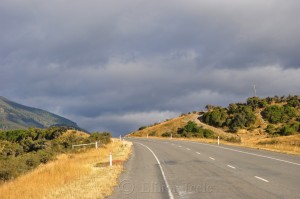 At Haast township, the gateway to the sea, we discovered that we didn’t want to stop in Haast. At the admirable Department of Conservation (DOC) Center, we discovered that the road over the Pass had only been completed in the 1960s. Prior to that, it had been a rough track and a long haul up the river and over the thundering Gates of Haast. Especially before the days of Gore-Tex.

Nowadays you can choose to sink your feet in a choice of scenic spots. The shores are often pegged as wild, a typical understatement, since every rocky stretch is littered with spherical boulders and the few remaining trees are bent at a permanent 45º angle. There’s nothing like seeing an entire tree upended in beach sand to remind you of the fragility of your skull.

What’s more, despite the armadas of camper vans, it still feels ancient. Unlike Central Otago, with its stark browns and golds, the West Coast is a land of grays and greens. The mountains have a grandparental air about them—they should, some of the forests pre-date the dinosaurs—and the kamahi trees reach out with arthritic fingers to snag unsuspecting aerials.

They trapped us for a time, but we eventually made it to Fox Glacier, one of two towns (Franz Josef being the other) that is built solely on the sturdy backs of tourists. Though both have their equal share of tanned and scruffy guides, I was pleased we picked Fox for our stopover. It has Angelina the chicken, for one, and a stunning view of Mount Cook from the crystal clear waters of Lake Matheson. When it’s not raining. Which it was. Lightly.

Yet the Lake still held its fair share of delights, primarily of the floric and faunic nature. Treading softly around the tour groups, we spotted eels, native birds and ferns, including the heruheru, also known as the Prince of Wales feathers. One is advised to genuflect if the silver fern is not in residence.

And, of course, there was the glacier. By plane, copter, boot and crampon the world comes to marvel at this thirteen kilometer mass of cracked blue that once barged its way to the sea. The rich pay thousands for aerial views; we chose to walk up the valley instead. As we stood at the shrinking face, I was reminded of two things: how much we’ve done to destroy our planet and why I flunked my 8th grade photo quiz on glaciers. All I could see was ice. 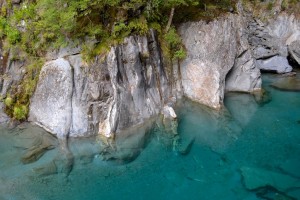 The following day it was onwards and upwards, headed for Hokitika. As we drove, the landscape shifted into a lower gear. The trees were fewer and flatlands more prominent. The sheds were all peeling with the same amount of picturesque water exposure, but the wilds were being replaced by gumboots on t-shaped posts and urea tanks. With its rivers full of gold and forests full of lumber, this was an area that had seen more than its fair share of lust. And expletives about the weather.

I wondered what Poutini would make of it. As a taniwha, a giant water spirit, he was the one who first took it into his head to abduct Waitaiki, the alluring wife of a North Island chief. After a chase through the islands, he found himself bottlenecked in the Arahura valley, near present-day Hokitika. Relying on the age-old cliche that if he couldn’t have her, no one could, he transformed Waitaiki into the rock pounamu and slipped past the sleeping husband to the sea. He’s rumored to be guarding her still (hence the name, Te Tai O Poutini, the tides of Poutini).

If you’re after one of Waitaiki’s children, you’ll find them in Hokitika’s innumerable jewelry shops under the signs marked JADE. If however, you’ve burned up nearly all your spending money on petrol, you can opt for the more educational option of the history museum. This also happens to be the best place, we discovered, to shelter from a potential Category 4 hurricane.

During our three hours, we learned that the Gold Rush of 1864 had transformed Hokitika from a single canvas store to the sixth largest city in New Zealand. We speculated on who would have used the services of Barbara Weldon, a stout, sickly looking 5′ 4″ prostitute who was blind in one eye and bald at the back of the head. And we discovered that neither of us wished to sample the local delicacy whitebait—at least, not until they had discovered some way of removing the eyes.

Still, it was only as we were watching the floodwaters creep up to the doorsill of a nearby café that we decided we might need an alternate plan for the evening. We had hoped to walk the beach and visit the local glow worm dell, but seeing as how the café owner was fishing for brown trout from the register, an indoor activity seemed more appropriate.

So we did what any self-respecting tourist would be ashamed to admit. We went to watch George Clooney in The Descendants. (I hasten to add it was in a genuine, if slightly rheumatic, 1935 Art Deco movie theater.) 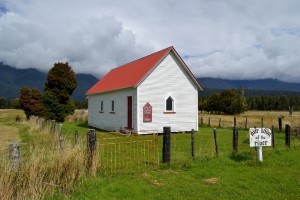 When we emerged blinking into the dusk two hours later, the tide had turned. The streets were wadeable, the plastic coverings were off the strollers and, wonder of wonders, the clouds had turned from malignant to benign. We had a few more hours before sleep and the long trip back down Highway 6. It was time for the light show.

Now, you can find more spectacular glow worm dells elsewhere in New Zealand, but I will always remember the night my brother and I took two minutes to walk from the main highway—there can be only one—and discovered the stars were out. For a long time we lingered under constellations of fungus gnats, then groped our way out of the dell just as the rain began to fall.

But you know what? I didn’t care anymore. After only a few days, I had grown to love this wild, woolly knockabout place. Call it something in the water, but if it came down to a choice between the Coast and Paradise, I was with Clooney: “Paradise can go fuck itself.”